The Manga – Vila Santa Thereza housing building has just been selected by the IAB (Brazilian Architects Institute) as one of the 20 projects to represent Brazil at the international phase of the 3rd Oscar Niemeyer Prize for Latin American Architecture. The exhibition and the award ceremony will take place at the Quito Architecture Bienial (BAQ) in November.

Instead of the 18 studios initially requested by our client, the Manga – Vila Santa Thereza Building is a 12 apartments building of different types, 3 studios, 3 1-bedroom apartments, 3 2-bedrooms apartments and 3 3-bedrooms apartments. This change in briefing pleased the client who had a lower investment and a higher return. But the most important gain was for the city with this venture that values social mix: students and singles inhabit with young couples and families.

The East-West orientation of the 12x49m plot allowed for a longitudinal use that favors a building with less exposure to the rising sun and the setting sun. Creating 2 blocks of 2 apartments per floor was a decision based on 3 factors: 1) respect for the typologies of the neighborhood that value a courtyard with trees, 2) the importance of the void as an element of thermal insulation, because, thanks to the East implantation -West, a block shadows another when the sun is in its most horizontal position, and 3) respect for the pre-existence of a large mango-tree that, unfortunately, could not withstand the inconvenience of the work. The void has its value and a mango-tree has been re-planted.

On the façades most exposed to the sun (East and West) a metal grid was installed that filters the light and the views, creating a yellowish “halo” in line with the mango tree that originated the project concept. These metal grades also reduce the solar incidence in order to reduce the need for cooling the apartments. Taking into account the origin of the prevailing winds in the region, the reduced width of the blocks as well as the design of the openings in each facade were planned to guarantee cross ventilation in all spaces. These passive sustainability characteristics of the building allow the demand for energy consumption of each housing unit to be well below the local average. The common areas have their light produced by photovoltaic panels installed on the roofs.

The typology proposes a kitchen / laundry area integrated with the living / dining area for all apartment models allowing greater interaction between users. Because it is located in one of the higher point of the city, and because it has floor-to-ceiling windows, all apartments have views of the street and the nearby neighborhood, but also of the distant Rio Negro, symbol of the Amazon. In short, the Vila Santa Thereza building tries to present conditions of passive sustainability and identical spatial qualities for all units in order to achieve social equality. 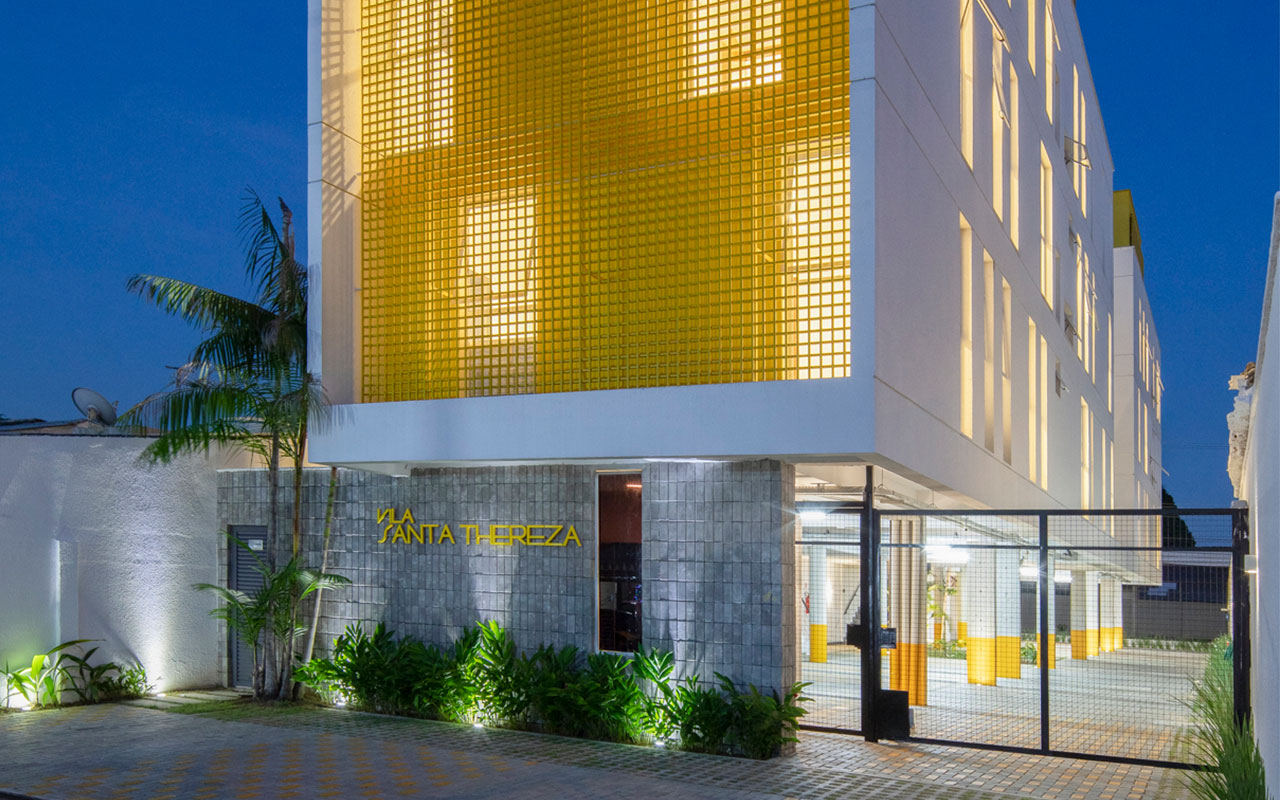